Yoga has become very popular during the last decades. Because of that interest, many different styles have been invented. And while each style is slightly different, the roots are mostly the same.

Yoga is a very old philosophy with a holistic approach to answering the questions of life. The physical part, the practice of asanas, is only one part of Yoga and Asanas were designed to prepare people for meditation by enabling them physically to sit still for a long time by developing the necessary strength, flexibility, and the capacity to control their breath.

This physical practice is the base from which to learn and experience many Yogic principles. Yogic practice is very healthy and is suitable for performing every day. There are a variety of styles to explore and maybe even combine toward a practice that is perfectly designed for your individual needs and preferences.

Note: Now you can do your first yoga practice at home. I’ve recently reviewed a service called Grokker, where you can follow yoga classes, programs and much more. I highly recommend this service and you can find more on my Grokker review here.

Anusara means flowing with grace, flowing with nature, and following your heart. It is a health-oriented Western approach to yoga that became very popular over the last decade. Anusara was developed from Hatha and Iyengar Hatha Yoga by American-born yoga teacher John Friend in 1997.

Founded on the “Three As” of attitude, alignment, and action, Anusara yoga draws from classical texts while applying its philosophy to the more physical aspects of asana practice. The poses in Anusara yoga are heart-oriented, meaning that they are expressed from the inside out. Not trying to control the body and mind from the outside, but experiencing the poses originate from a deep creative and devotional feeling inside.

Developed from the tradition of Krishnamacharya, Ashtanga Yoga is a very popular style of Hatha Yoga. Ashtanga Yoga is practiced in four defined series of dynamic asanas. Usually only the first series called “Roga Chitkitsa” or even only parts of it are taught in regular classes.

It is said that there are only a few people practicing the fourth series as it takes a long time and a lot of very regular practice to complete the advanced series.

Ashtanga yoga incorporates epistemology, metaphysics, ethical practices, systematic exercises, and self-development techniques for body, mind and spirit and is the base from where other modern dynamic Hatha styles are derived from.

Bikram Yoga is for those who love to sweat and like routines. Bikram Yoga was created by Bikram Choudhury and has spread far and wide since the early 1970s. Bikram Yoga always is practiced in a room heated to 40 degree or around 104 Fahrenheit and with a humidity of around 40 percent. The Bikram beginner series is a sequence of 26 asanas and two breathing exercises, practiced and taught always in the same way. Official Bikram classes are only taught by Bikram-certified teachers following a standardized script.

Hatha Yoga is a kind of yoga focusing on physical and mental strength building exercises and postures which are primarily described in three central texts of the Hinduism, whereof the Hatha Yoga Pradipika is the most popular one.

In the 20th century Hatha Yoga became popular throughout the whole world when we talk about Yoga without any specification, we often mean Hatha Yoga. The word Hatha literally means force and describes a system of physical techniques that are the base for a broad conception of Yoga.

Many modern schools and Yoga styles in the West are strongly influenced by Krishnamacharya, who is known as the architect of Vinyasa Yoga. Vinyasa Yoga Combines movement and breath and practices and asanas are modified to what is appropriate for an individual. Following this, some of his students invented and popularized styles like Ashtanga Yoga, Vinyasa Yoga or Iyengar Yoga.

The most popular and standardized version of Hot Yoga is Bikram Yoga. Hot Yoga is something you either like or you don’t. People with low blood pressure or any infections should be very careful with hot yoga or should choose another style.

B.K.S Iyengar invented the Iyengar Yoga style which also belongs to the Hatha Yoga tradition. Iyengar Yoga is especially known for the very precise alignment in the asanas and the use of props to support the correct posture.

B.K.S. Iyengar wanted to enable beginners, the elderly, and all other types of people no matter what they were suffering from to feel the whole effects of the asanas. As B.K.S. Iyengar himself was not in very good health when he started Yoga and so his focus was inventing a method to get along with any individual precondition.

B.K.S. Iyengar is meant to be one of the most famous Yoga teachers in the world as he was one of the first teachers to travel and teach in the US and Europe and adjust his teaching to the needs of the western people.

Derived from Ashtanga Yoga, Power Yoga was invented in the US by Bryan Kest and Baron Baptiste. Power Yoga is characterized by a strong workout as the originators firstly focused on students that were mainly interested in challenging dynamic movements and not so interested on the spiritual aspects of Yoga. However, and depending on the teacher, you will also find Power Yoga classes incorporating a mantra or a meditation.

The movements are connected within a flow and guided by the breath. Power Yoga classes involve the breathing technique of Ujjai breath which is practiced during the whole class. This means breathing only through the nose. The descriptions of Power Yoga and Vinyasa Yoga are often used for the same thing.

Vinyasa Yoga was developed out of the Ashtanga tradition and describes a continuously flowing Yoga practice that connects the movements with the breath. Yinyasa Yoga classes have a strong focus on the physical aspects and are quite powerful so that you sweat a lot.

And don’t get confused; the word Vinyasa also describes a short sequence of poses done very often through a Vinyasa Flow practice and means flowing through from Downward Facing Dog to a Plank Pose to Chaturanga and Up Dog back to Downward-facing Dog. And thereby each movement is connected to one inhalation or exhalation.

Being pregnant or having given birth requires a different Yoga practice as the female body changes during these times in a woman’s life.

During pregnancy, there are lots of changes happening in the body. Prenatal Yoga supports the female body with these changes by making it strong and flexible in the right paces to prepare itself for a hopefully easier labor, delivery and recovery.

After having given birth, the body again feels different and has special needs that can be supported by a proper Postnatal Yoga practice. As the abdominal muscles are most affected by pregnancy, they are the ones that are focused on as well as the pelvic floor.

It is recommended that, to give the body time to recover, you should wait around six weeks after delivery before starting Postnatal Yoga practice. The Postnatal Yoga practice focusses on special asanas first to regain strength in the back and the abdominals and then goes on back to a usual practice by rebuilding strength and flexibility step by step.

Focusing on full relaxation, a Restorative Yoga class usually consists of only a few poses that are held for quite long and often are supported by props that allow the body and mind to completely relax. Holding the poses for 5, 10, or even 15 minutes, restorative classes include twists, gentle backbends and seated forward bends as calming asanas.

Taking so much time allows the body to relax gradually and completely. Many restorative practices are based on the teachings of B.K.S. Iyengar and the Iyengar Yoga style.

Yin and Yang are the both opposing forces that rule our lives as they are a unity like male and female, day and night, sun and moon. The dynamic Yoga styles focusing on active muscle work are more yang-related while Yin Yoga is a more passive practice.

The Yin force refers to the female energy which helps us to calm down and is physically related to the bones and joints. Yin Yoga focusses on the deeper levels of the body, the connective tissue, and the fascia by holding poses for very a long time. Using the breath and gravity, Yin Yoga helps you to really melt into the poses while developing patience and mindfulness.

Yoga Nidra also called the Yogic sleep or dynamic sleep, describes a practice where all levels of the consciousness are fully and intentionally engaged. The practice of Yoga Nidra follows a special sequence which guides the practitioner from the outward level of perception to the deep inner levels of being and then back to full awareness again.

The word Kriya derives from “Kri” which means action. So Kriya Yoga means the Yoga of action and includes everything that is simply done and what has an effect – no matter if the practitioner is a beginner, intermediate or advanced.

It is said that the sacred science of Kriya Yoga incorporates special advanced meditation techniques whose devoted and steadily practice should lead to the realization of God and liberation of the soul from all forms of bondage.

The exercises practiced within Kriya Yoga focus on clarifying the Chakras, the energy centers within the body, to free the way for the divine power of the breath which should put divinity into everyday life.

Invented in New York in 1984 by Sharon Gannon and David Life, Jivamukti Yoga is a quite challenging Yoga method based on a philosophy that incorporates mindful, sustainable and holistic thinking and acting.

The Jivamukti Yoga style is a branded, proprietary yoga method and follows clear rules wherever it is offered. There are six types of classes peculiar to Jivamukti and if you will give it a try it makes sense to choose a basic or a beginner Vinyasa class first.

Do your first Yoga Practice

Give it a try, it’s 100% Free and you only need some minutes of your time. Join Katrin and start your Yoga for Beginners Guide. 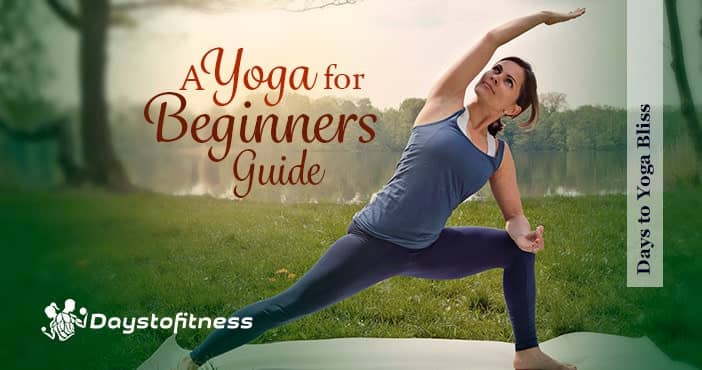 One Article with Tips and Tricks to Boost your Well-being

100% FREE: One email per week, exclusive content, no ads, and, of course, you can unsubscribe anytime you want.

Hi! I’m Katrin and I’m very happy to introduce you to the world of Yoga here at Days to Fitness I’ve been studying yoga for more than 10 years now. From the very beginning of my yoga practice I have found peace and strength and serenity and gratitude soon followed. The desire to be able to pass that on to others inspired me into doing a yoga teacher training course in 2013 in India at the Ashiyana Yoga Centre and aroused my interest in yoga and holistic life approaches...continue reading