Very rarely an individual will come around who has the grace, charm, and intelligence to start a movement.  In a country where fitness is anathema and rates of obesity are on the rise, Chalene Johnson did just that.  Going against the sit-down culture, Chalene has worked tirelessly to promote a healthier way of living where exercise is not only a part of life but also an invaluable part of a weekly routine.

A notable point in Chalene Johnson’s life was when she joined Beachbody.  Through this company, Chalene Johnson developed the exercise known as Turbo Fire.  Beachbody was unique at the time for combining music, dancing, and maritial arts as the basis for a fully engaged work out system.  Individuals who had previously not had much luck found her Beachbody DVD’s to be helpful and empowering.  Amazingly enough, Beachbody ended up selling more then 4 million DVD’s, representing nearly 9 years of effort and work on her part finally realized.  From Turbo Fire, Chalene Johnson was able to use her momentum to further her own career, working towards additional workouts and even the production of her own book, Push.

Starting with individual motions that Chalene Johnson found useful for exercise, she carefully began constructing different exercise routines that a wide range of people could utilize for better health.  With a mass appeal as her goal, the first full routine to be produced was the Turbokick, for which she became famous.

Chalene Johnson capitalized on her research and study regarding exercise through a series of videos, including PiYo Workout, TurboFire, ChaLEAN Extreme, TurboJam, PiYo, and TurboKick.  These videos have been released over more then a decade with between 2 to 3 years between each video.  During that time, Chalene Johnson constantly works as an instructor at 24 Hour Fitness in Irvine, CA where she continues to improve upon and expand upon her most popular workouts.  In addition, she uses the time to explore new workout techniques that may one day make their way into another instructional video or DVD.

One of the biggest misconceptions in exercise and staying healthy is that a routine either has to be punishing and extremely challenging or it is not worth doing.  In fact, people starting with high-impact sports often develop injuries during the beginning of their fitness goals, stopping them from ever getting to the point where they can be healthier and stronger.

The PiYo workout, official site here developed by Chalene Johnson in 2000, looks to correct this misconception by providing a high-energy exercise routine that is surprisingly low-impact.  What this means is that you will be able to become leaner while not causing potential injury to muscles, bones, cartilage, and everything else that can wear down when you are not in peak physical shape.  In this way, the PiYo routine works for everyone, regardless of age or ability.

The PiYo routine incorporates a great deal of what Chalene Johnson has learned regarding fitness, including elements of Turbo Fire, which inspired all of this.  PiYo reports being able to provide incredible muscle-sculpting power, along with core-firming benefits that will help anyone be stronger.  There is also the strength and flexibility made possible through the incorporation of numerous yoga moves designed to test and improve our overall constitution.

Typically, the PiYo instructional DVD is sold as a package of 3 DVD’s with over 10 easy-to-follow workouts.  The DVD’s usually come with a workout calendar as well as a quick tart guide to help get you started.  Depending on when and where you get the DVD’s from, you may also get a free ‘Get Lean Eating Plan & Tape Measure’ to help you accurately record your weight loss and eat better throughout improving your health.  With so much in a single package, it is no wonder the PiYo is so popular.  In addition, Chalene Johnson recently released a PiYo workout in 2014, which improved on her model and incorporated a lot of new information she had learned in the subsequent 14 years.

The ChaLEAN Extreme Workout came out in 2008 and represents a culmination of what Chalene Johnson has learned through helping thousands of people.  Focusing on being lean, the ChaLEAN Extreme Workout emphasizes exercises that boost your metabolism and help you better process food when you eat.  The end result is less fat on your body, less weight on your body, and a leaner, fitter body.  How is this accomplished?  Chalene Johnson makes use of Lean Phasing, a patented technique where you shift your fat-burning focus from cardio to resistance training.  The added benefit of doing this is that you will have far more fat burning potential because the nature of exercise is specifically shifted towards improving your resistance.  The ChaLEAN Extreme Workout emphasizes burn, push, lean, and extreme cardio to help you get lean.  When purchasing ChaLEAN Extreme, you will usually get a range of additional features, including free gifts like Burning Food Guide, Grade Resistance Band, Thigh Toner Band, and Ab Burner.  Learn more about this home workout program here.

Turbo Fire represents the one workout that helped to put Chalene Johnson on the map.  Turbo Fire creatively combined music, dancing, and martial arts into a single system of highly effective workout.  While eventually released as a 2010 DVD, the Turbo Fire has been among the most popular DVD’s as its new take on health and fitness is finding a market with Americans.  In addition, the popularity of this workout is so high that it broke an amazing 4 million sales barrier that few exercise workout DVD’s ever reach.  While there is a learning curve involved, those who stick with Turbo Fire report incredible results. Read more about this workout. 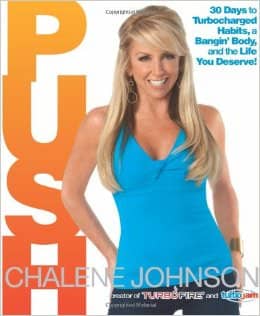 On December 20, 2011, Chalene Johnson released her first book.  With a full name of ‘Push: 30 Days To Turbocharged Habits, a Bangin’ Body, and the Life You Deserve!’ the book was released by Rodale Books, available at amazon.com.  In the book, Chalene Johnson lays out her 30-day system that will help readers to reset their priorities, become better organized, and begin setting goals for their own personal health.  Not only is losing weight covered in Push, but methods for keeping the weight off as well are covered.

With the tools you need and never knew you had, Chalene Johnson hopes that Push will provide the right direction for those who are motivated to change.  In addition, Chalene Johnson advertises Push along with a range of possible workout aids, helping you to acquire the things you need to stay on focus with your weight-loss and health goals.  With Push, you are one step closer to your ideal you.

One Article with Tips and Tricks to Boost your Well-being

100% FREE: One email per week, exclusive content, no ads, and, of course, you can unsubscribe anytime you want.