You are at:Home»Nutrition»Gluten»Gluten Intolerance Foods to Avoid

Gluten sensitivity and intolerance are on the rise with 6-7 percent of the American populous suffering from dietary issues related to gluten. One percent of the U.S. population suffers from Celiac disease – a severe and serious autoimmune disease triggered by gluten. Gluten is the protein found in many grains and brain-based foods so it is essential that, if you have issues with gluten, you avoid goods that contain it.

To help you do this, I’ve collected 20 gluten free recipes for you to enjoy – each one is easy to make, healthy, and delicious. But, because I want to make life as easy for you as I can, here is a list of high gluten foods you need to avoid.

Grains are probably the biggest source of gluten in most people’s diets. We eat grains in their natural state and use them to make a wide variety of foods. A few grains are gluten-free but most are not. The ones you need to avoid are:

A great many staple foods are made from grains, especially wheat. Wheat is processed to make flour and that is than used for baking. If you have issues with gluten, you’ll need to avoid foods like:

Many condiments and seasonings contain hidden sources of gluten. In many ways, these are the most nefarious because you might think you have eliminated all sources of gluten by going grain-free but still be inadvertently eating gluten that is hidden away in less obvious sources. Unless a product specifically says it’s gluten free, you need to carefully check the ingredients list for signs of gluten. Condiments and seasonings that may contain gluten include:

Some alcoholic beverages contain gluten – the main culprit being beer which is usually made from wheat and malt. Other grain-based drinks include:

Some processed meats contain grains which are added as fillers or to “bulk out” meat products. The main culprits are:

Just because a food does not directly contain gluten doesn’t mean traces of gluten aren’t present. Food is made in factories and those factories process a wide variety of foods – many of which contain gluten. For example, factories that produce gluten-free bread will often also produce regular bread so it’s all too easy to consume gluten by accident. 40% of gluten-free processed foods contain small amounts of accidental gluten so try to purchase foods that are certified as being prepared in a gluten-free environment. 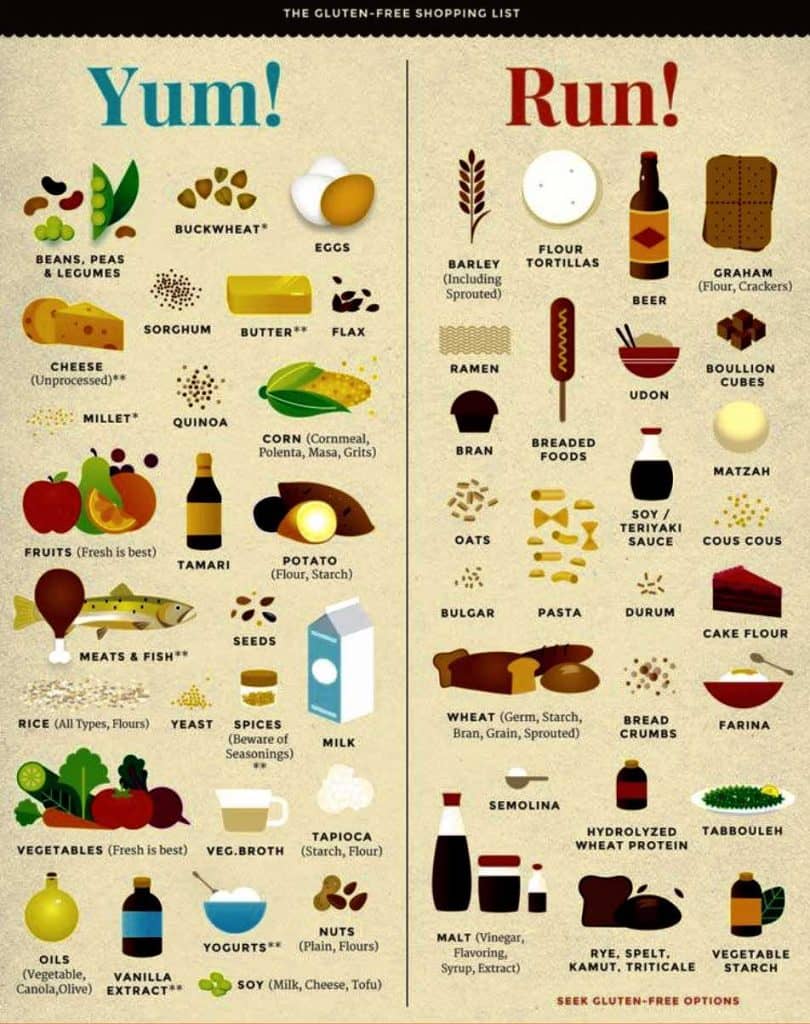 So, now you know which foods to avoid if you want to eliminate gluten from your diet. It might be difficult initially but, once you get rid of the gluten, you will start to feel much happier and healthier.