Update: Fixate Cookbook was recently launched. Including 101 recipes, all 21 day fix approved. Learn more about this cookbook on my fixate review here.

Let’s get right to it! 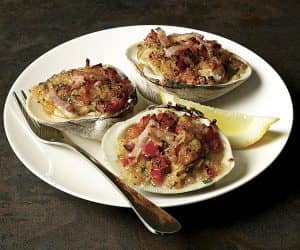 The most important thing for you to do when preparing this dish is to make sure that your littleneck clams are NEVER overcooked. There’s nothing worse than overcooked clams – they become as tough as rubber and a nightmare on the palate.

To get things going, simply preheat your oven to 450°F and then start the actual preparation of the meal.

Put your clams, your bay leaves, and the water into a large saucepan, covering it and then bringing it to a boil. The moment you reach a boil you’ll want to bring the heat down to about medium/low and continue to cook the clams until they begin to pop open. It should only take 5 to 10 minutes – and probably will be done sooner rather than later.

Drain all water from the pan and throw away any claims that aren’t opened up.

Next, you’ll want to heat up your oil in a large cast-iron skillet over about medium heat, adding your shallots and bell pepper once you’ve come up to temperature. Stir them up until they are perfectly soft – but not browned (about two or three minutes).

Once that’s taken care of, add in your Canadian bacon and heat for about a minute, at which point you’re going to want to stir in your vinegar while transferring everything to a larger bowl.

The last step is to stir in your breadcrumbs, your Parmesan cheese, your chives, and all of your spices – popping clam meat from the shelves and stirring everything into the breadcrumb mixture. Stuff the clam meat back into their shells and then bake everything for about 20 minutes and you’re good to go! 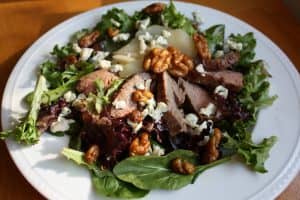 This is a great dinner for when you are a little crunched for time or just don’t you like spending too long preparing and cooking a meal after a long day.

All you really have to do is grill up your steak until it is your desired temperature (anywhere between medium rare and medium is best), allowing it to rest after cooking or 15 minutes or so to allow for proper juice redistribution.

While you’re allowing your meat to rest, throw lemon juice, oil, walnuts, and mustard into a food processor, pulsing it up until everything is perfectly smooth. Put your spinach or other greens in a mixing bowl, toss the salad with your new lemon walnut vinaigrette, and then add sliced steak to the entire mixture.

Cooking fish gets a bad rap as being almost impossible, but when you prepare it this way you won’t ever have to worry about making any mistakes.

The first step is to heat your oven up to about 350°F, but you’ll have the chance to prepare the rest the meal for cooking as it comes up to temperature.

Cut out a large rectangle of foil (big enough to make your own envelope with), and place the pak choi on the foil first. Next, you’ll want to add your fish and then the ginger and garlic, at which point you’ll then drizzle the soy sauce and rice wine over the entire dish.

Before you throw the entire folded up envelope into the oven season with a bit of salt and pepper (to taste), and then cook the entire dish for about 20 minutes.

Boil up some brown rice and squeeze a bit of lime juice over the entire dish before serving and you are off to the races!

Get more recipes ideas to use on your 21 Day Fix daily eating plan.

The Days to Fitness Recipe Book 1st Edition was published in April 2015. So far, it has been downloaded over 25,000 times.

Such an amazing response deserves an equally amazing Thank You.

I’ve been working hard, and finally it’s here: the new 2nd Edition of the Days to Fitness Recipe Book.

What’s new in the 2nd Edition ? 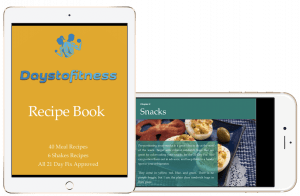 Includes 46 Easy and Healthy recipes that you can use or get inspired to create your owns.

Nutritional and containers information is provided in every recipe, so you can easily organize your eating plan.